I tested this on a lightly loaded Ubuntu 8.04 server.

The installation ISO for 8.04 LTS Server can be downloaded from http://www.ubuntu.com/getubuntu/download-server

I installed Ubuntu Server on a VM with a 2GB drive and 512MB RAM.

The default hostname given during the install is ‘ubuntu’. Be sure to change it to something more distinct.

The installation offers LVM, and even encrypted LVM, but if you select them it does not actually install the O/S on an LVM partition. For that you have to enter manual partitioning. I created a 100MB ext3 /boot partition (GRUB does not support booting from an LV) and allocated the rest of the drive to a PV.

Once the two disk partitions are created you can configure the Logical Volume Manager.  Allocate LVs for the various filesystems: at least 200MB each for / and /var and 250 MB for /usr (installing VMware tools requires more disk storage, a 350MB /tmp to untar the installation bundle and 600MB /usr).  I like using multiple separate filesystems because it reduces the risk that a runaway process will consume all available storage and render the system unavailable.  Using LVM helps make multiple filesystems manageable because it becomes much easier to extend a filesystem when you need to. 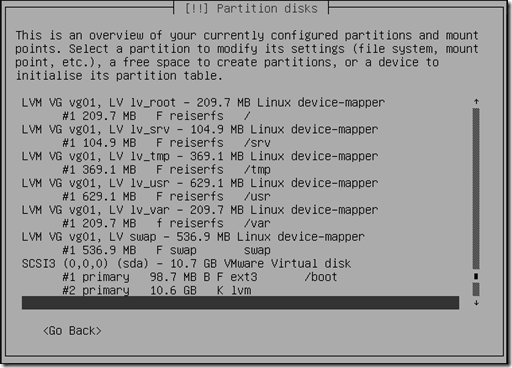 Ubuntu Server installation offers a minimal menu of packages to install.  I chose OpenSSH (OpenBSD Secure Shell) and PostgreSQL (v.8.3).  UFW is installed, but not enabled by default. 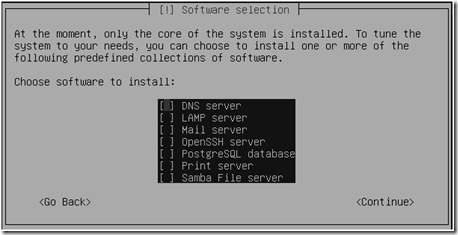 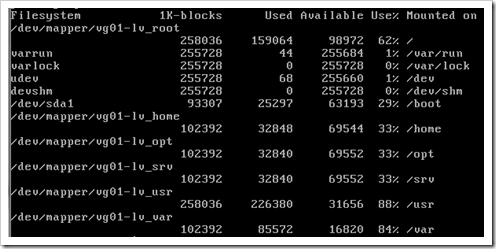